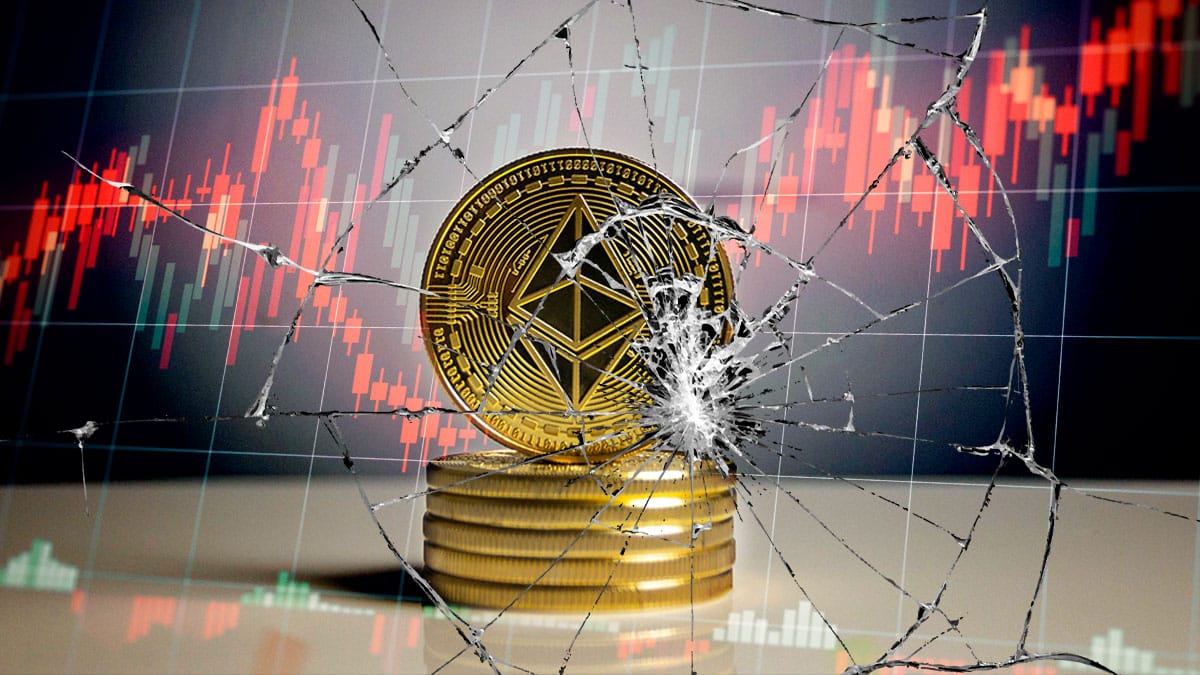 The cryptocurrency market rally, which seemed to be headed by Ethereum due to the expectation of the expected merger, was stopped in its tracks. Last week, everything seemed to keep its course, but both bitcoin and the rest of the market fell apart again. And the outlook looks little hopeful again.

At the close of the weekly candle, Ethereum’s cryptocurrency, ether (ETH), ended losing 16.39% of its market value between last Monday and this Sunday, August 21. It went from touching $2,000 for a moment to falling to $1,600. And in the few hours that go from this Monday, it has gone to 1.577 dollars with another 2% down, in data from CoinMarketCap.

As we reported in Criptonews last Friday, the day began with a significant drop in ETH, on a par with bitcoin (BTC). As a result, there are those who expect greater volatility for the entire market, in addition to the fact that bullish expectations seem less widespread in previous weeks.

Those expectations were such that Friday’s drop seems to have taken even traders by surprise. During that day, the largest losses were generated in a 24-hour range since two months ago. Leveraged traders were mostly betting on the upside before the market fell. And they came out losing an accumulated of more than 450 million dollars in liquidations.

In the specific case of Ethereum, analysts were already pointing to very high levels of above $2,000 per unit, with promising data such as the fact that ETH was surpassing bitcoin in open interest and even in settlements, which accounts for a greater capital investment by traders.

Analysts mainly agree that the market proved not to have the strength for a rise as expected, while the financial crisis becomes more serious in both the United States and Europe.

The expectation that there is around the merger that will give way to Ethereum 2.0 was of no use. The same one that, as we had been pointing out in previous newsletters, was driving the cryptocurrency market this time. It didn’t even matter that during the week it was announced that the code for that transition to Etheruem 2.0 is already ready. The market lost strength and Ethereum was unable to lift it.

Another stablecoin loses its parity with the dollar

By now, the term stablecoin seems to be losing its meaning. Last week another of the currencies that intends to maintain parity with some external asset, in this case the dollar, lost that equality.

The turn this time was for the HUSD stablecoin launched a few months ago by the Huobi exchange. The company quietly disassociated itself from the project last April and now, after the fall in its value compared to the dollar, alarms went off in the bitcoiner community.

Starting from the most emblematic case, that of Terra USD a few months ago, and taking into account that two weeks ago the aUSD parity on the Polkadot network also fell, confidence in stablecoins has been taking a dent. At the moment, this does not seem to affect the most important ones: We are referring to Tether (USDT), USD Coin (USDC) and Binance USD (BUSD).

Featured cryptocurrencies of the week

Although the negative closing of the week seems to end the bullish prospects of the market (at least among the most representative cryptocurrencies), during the week there were some cases highlighted in this newspaper for various reasons.

For example, the upward movement of Chiliz (CHZ) as the FIFA World Cup approaches and on a par with the return of Europe’s major football leagues. This is not unusual considering that Chiliz is the network of Socios.com , one of the leading cryptocurrency platforms and the football world.

Another currency that stood out during the week was the Shiba Inu (SHIB), which managed to consolidate a 100% rise between June (its worst level of the year) and mid-August. This time, without the influence of Elon Musk.

Speaking of Musk: the entrepreneur returned to the eye of the hurricane of the cryptocurrency market, unexpectedly this time. With a joking tweet about his alleged interest in buying Manchester United football club, a token not backed by the English team it had an amazing rise.

But not only was it a token unrelated to the club, but it did not have liquidity. There was no real market for that token, called MUFC. This served as a reminder about the need to study each project well before investing, something that is also evident taking into account the crazy pace with which tokens are created in this market.

The latest featured token was recently announced by one of the most important companies in Latin America. Free Market launched MercadoCoin on the Ethereum network.